Any way to do "If this, then that" scenarios logically in SCOM?

For example, I’m trying to measure website availability but I don’t know trust just 1 site not connecting to it as 100% accurate and 2 of 3 sites unable to connect would not work either. Is there a way to say the following:

If each monitor above fails then go critical, otherwise parent health is green and the individual failures do not roll up?

If you want to do that kind of logic, I'm sure it's possible with custom MPs (as with most things), but in the console this is not possible.

You can create a DA containing the objects and specify the % of objects need to be unhealthy to roll up though, which is about as close as you are going to get. 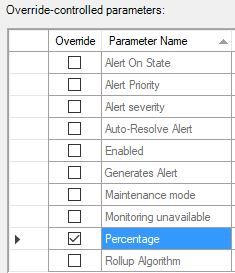 Ok I’m trying to do this but am finding conflicting information. Do I need to select Rollup algorithm as well? I tried that and set it to Worst State of a percentage and set the percentage to 100 and it said I put in an invalid value.

I have url genie hitting websites from different locations and would like to only get a health state change if all are failing from multiple locations to the same site so trying to find the best combo here in the override settings.

You’re almost there - you just need to override the rollup algorithm as jelly described but change it to “Best health state of any member”.

In this mode, as long as at least one of the locations is showing green the rollup will be healthy. If one is a warning and the rest are critical, it will roll up warning, and obviously if they are all critical it will roll up critical.

To confirm Jelly’s answer. I have done the same where I needed to monitor a 3rd party remote site, to see if it was up or down. I didn’t have access to the network equipment on the site. What I did was create a DA for the site and set the monitor/dashboard for the site to go red if the health state of all the servers on the site was red. If even one was green, I assumed the site was contactable.

Do I need to do anything with %? Also, what about the health rollup policy tab (not override)? That looks like it’s the same thing.

% is only relevant for the “Worst health amongst…” algorithm. If the monitor is not in a sealed MP, you’ll be able to change it on the rollup policy tab and it will achieve the same thing (though if you do, don’t forget to remove your previous override changing it to “worst health amongst…” as overrides have priority.)