I've added new servers to SCOM and they aren't showing up on our server state dashboard (been 15 minutes already), is there a way to force update the dashboard?

Over 15 minutes ago I successfully installed SCOM monitoring agents on about 6 new servers. How long should I wait before seeing those servers on our server state dashboard? Is there a way to force update Squared Up to pick up the new servers?

What is the health state of the object in the OpsMgr console? Is it showing that it is monitored and happy there?

How are you populating the dashboard? Check your scopes.

Basically if it looks good in OpsMgr, and the dashboard page/view criteria are set right, it will show up in SquaredUp right away.

Within a few minutes of adding them to SCOM their health state updated to healthy (see screen shot below).

My status dashboard scope is All Windows Computers (which right now lists all the servers besides the new ones I just added).

update - if I change the scope to Windows Server 2012 R2 Full Computer Group then I see the new servers. However I have some 2008 servers as well which I want to see at the same time as the 2012 servers. So the question is why do some server 2012 R2 servers show up in the scope of All Windows Computers and some do not? The other question is can I create a custom group in SCOM to house all 2008 R2 servers AND 2012 R2 servers?

If you view the members of the All Windows Computers group in SCOM, do the new servers show up there? It looks like that group is dynamically populated by the System Center Managed Computer class. Have you tried to use that instead of the group in your scope? 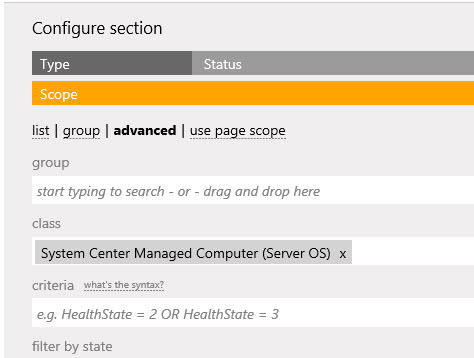 So I checked All Windows Computers group in SCOM and did not see the new servers listed, however when I used the System Center Managed Computer (Server OS) scope, they showed up! Thank you!

There isn’t a way to force this and typically I would expect a server to appear within SCOM within a few moments of them being monitored, and thus Squared Up. If you look in the SCOM console, you should be able to see them in the Windows Computers view, however you may notice that they don’t yet have a health state.

This is due to the time it takes for the management packs to be deployed and the various discoveries to run, then for the monitoring to begin.

I’m going to go out on a limb and ask: Does your status dashboard only show servers that are either warning or critical? If so, they may not appear until they have gained a health state, usually this is within 15 minutes.