Hi all, I’ve been tasked with creating a weekly report for management reporting on general server uptime for a group of production servers. I’ve accomplished this using the MS Generic Report Library>Availability report in SCOM 2012 in combination with a group of health watcher objects (this shows true uptime as opposed to targeting a group of computer objects which will report any critical state as downtime), so i now have individual server uptime percent for any given health watcher object. See the image for an example of existing report. What i need now is an average of the uptime over a period for all servers (health watcher objects) of the same group. Does anyone know of a report or option within SCOM or squared up that would generate such a report or dashboard? Thanks in advance! 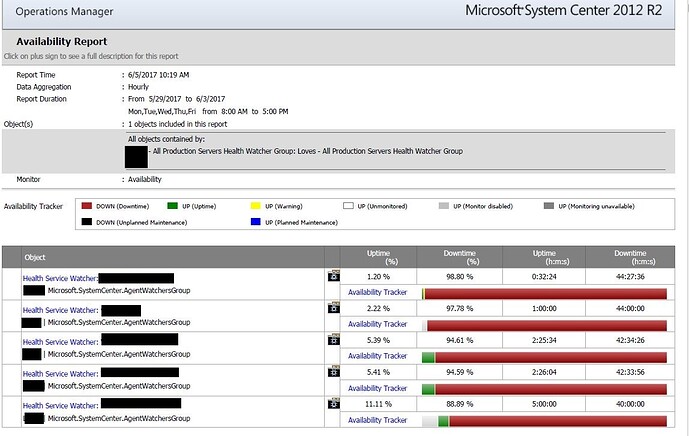 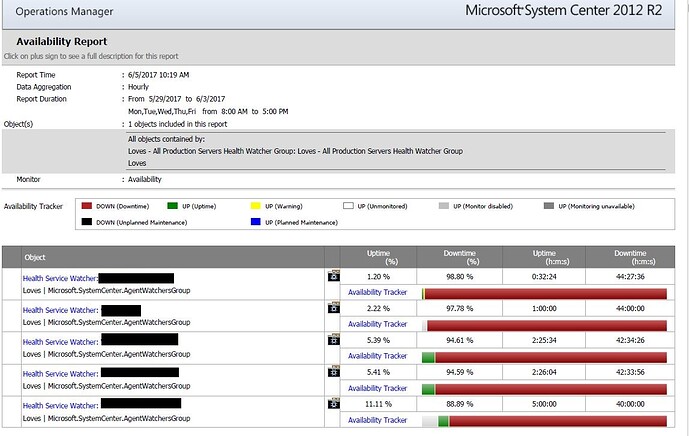 You could try creating a group of health service watchers and add a health rollup to that group. For more information on that you could check https://tickets.squaredup.com/support/solutions/articles/200804-what-to-do-if-a-group-shows-no-health-information-how-to-create-a-health-rollup-monitor

Then create a standard availability report, but instead of adding a group, you add that group as an object.

It’s not an exact answer to your question, so I’m posting this as a comment, but I think you might find the following recent blog post sparks a few ideas of some of the things you can achieve in Squared Up in this area -https://squaredup.com/blog/building-amazing-sla-availability-dashboards/ - hope that helps

Thanks Jaspervd. The only problem i see with that is isn’t it accurate that the rollup will report on the healthiest or least healthy (depending on how you set it) object so i would basically get all red or all green right? I very well could be wrong but that’s at least how i’m seeing it. What i need is an actual average percent of uptime for all of the health watcher objects in the group : /

Thanks crowd, this isn’t exactly what i’m needing but does look super useful! i could definitely apply this in some other areas

Hi Zac, another helpful blog for you in this area, this one from M’soft PFE Wei Lim (whose blog is always worth keeping an eye on ) - https://blogs.msdn.microsoft.com/wei_out_there_with_system_center/2017/04/28/opsmgr-calculating-the-overall-availability-percentage-of-distributed-applications/

Excellent thanks! This one is good too, though i’m looking for something to target the average uptime for a group of servers as opposed to a distributed app. The first link looks like it will do the job actually, i just don’y think i’m configuring the SLO in SCOM correctly because i’m getting 100% on the group object even though not all of the server objects are 100%… I’m targeting the Health Watcher class for the group, any idea how exactly they configured the General/Uptime SLO in the example?