By the looks of it you can’t create nested groups? Any pointers/help would be much appreciated

I believe you can achieve this by using the 'Group' option instead of 'List' when you scope the Status plugin. The 'Group' scope allows you to show the members of the group listed in the scope. So here: 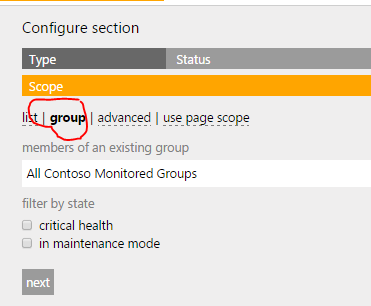 Note that the status view will list those groups and not their members so health roll up of those dynamic members of ‘All Contoso Monitored Groups’ will show if their members have issues. You can then duplicate this and use the same logic for performance/alerts/etc. as is for the scope or through Advanced.

There is no way in the GUI to create a group that has a dynamic sub group population, you’d have to update the parent group every time you create a “child” group.

You’d still have to create a dependency monitor anyway for your newly created group even if you could dynamically add it to a parent for the scenario you’ve described.

Thank you for your response - Could you explain how Tao Yang achieved this? I the screen capture I provided you can see he has a Status View called group and that is populated with the state of ALL groups in SCOM. All I want to do is have something similar but only for groups I specify.

Tao Yangs MP was create to make things easier when creating group dependency monitors. All of what that MP does can be achieved without it.

If I understand you correctly you’ll need to perform the following:

Create your parent group and in the dynamic members tab select group as the class and have display name contains your group naming convention. (I miss understood what you were asking before, I thought you wanted to know if you could use the sub groups tab with a dynamic rule).

You’ll then need to create your dependency rollup monitor on the parent group and then on any child group that’s added in the future. You can do this using Taos MP (easy) or manually through the authoring console (not so easy)

You should be able to create a health state view that shows data related to “Group” and show data contained in a specific group “Your Parent Group”. You shouldn’t really need to do this however considering SquaredUp does a much better job of displaying this information.

- I now get it to return some groups under the parent group but for whatever reason I’m not getting all the Groups back - And yes all the groups conform to the naming convention. i.e. they all start with "Group - " followed by the name therefore I would be able to create an expression to say display all where Display Name Contains “Group -”