A Bind Data Source in Management Group Customer – SC2016 has posted items to the workflow, but has not received a response in 89700 seconds. This indicates a performance or functional problem with the workflow. Workflow Id : Microsoft.SystemCenter.CollectPerformanceData Instance : SRV2.domain.com Instance Id : {6397F74D-20FC-84D3-3E07-366342982C81}

SCOM 2016 UR5, two MS’s, only the secondary having this issue. Error in event log every 60 seconds.

This one has been bugging me for a few days now. Initially, this was all of the collect workflows, but a majority were resolved by updating the core MPs (looks like a few were missed during the last UR upgrade), but none of them were for the DW.

OpsDB has free space (if anything, it has too much), accounts are correct, and run as profiles have been double checked and verified against another environment that is working.

I also spotted that the Operations Manager Database is missing from the Management Group Health view:

The errors are not useful, no knowledge, or context:

I’ve trawled the net a number of times and can’t find anything that seems to do the trick.

Took me a while, but I figured this out - Turns out it was an old foe, creeping back up to bite me in butt.

We have 4 SCOM MG’s which are monitored by one large environment. The issue that I found I had resolved in the main MG at the deployment phase: Disable workflows for Agent Count, Agent Health, and Agent CPU Time in the MG that was having issues.

I noted that some of the informational events were for the SCOMpercentageCPUTimeCounter.ps1 script. For the MS that was having the issue, this was running for around 50 seconds.

This coupled with the fact it was running from 2 of the MG’s on this one server, plus the collection from the agents. Disabling this guy did the trick: 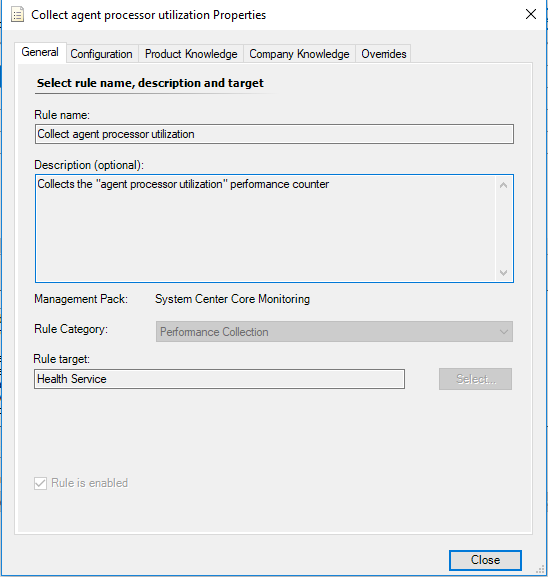